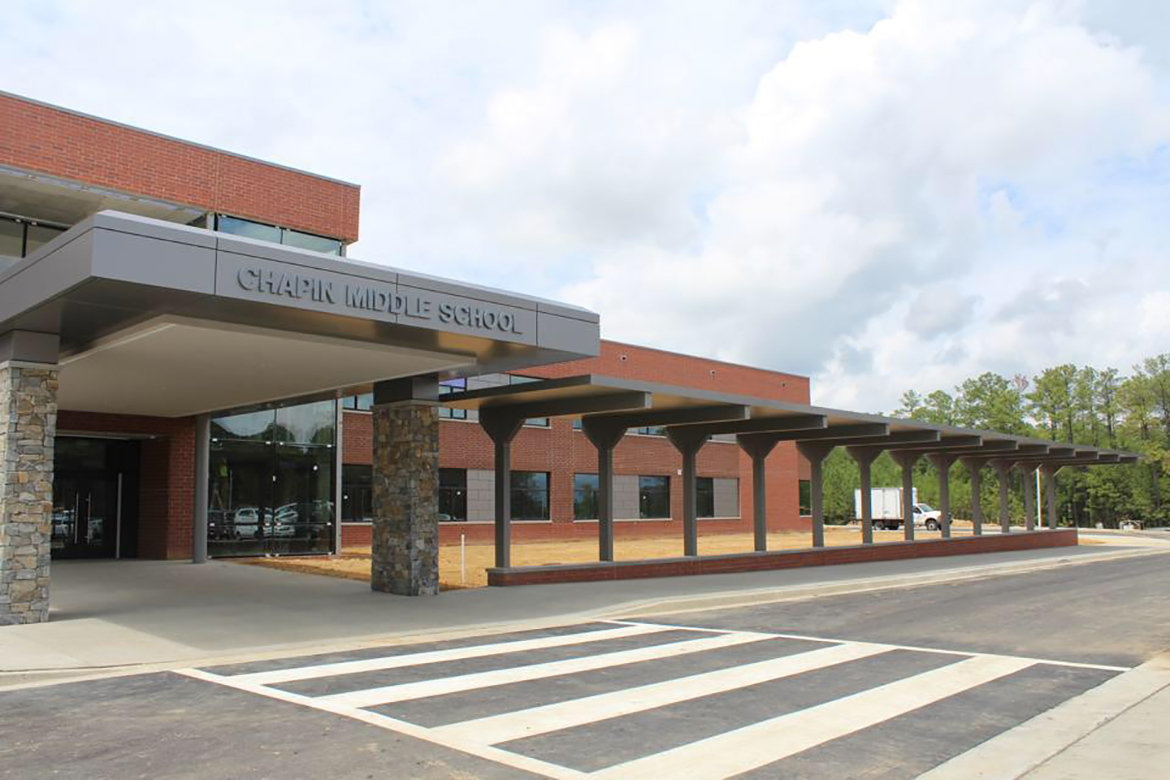 Middle school students in Lexington-Richland School District Five will embark on a new year Wednesday at a brand-new campus designed to launch them into a successful high school career. The school’s outside is not quite finished, but Chapin Middle teachers say it’s the inside — the people and the instruction — that counts.

Teachers and construction workers stayed late into the evening Monday to ensure each classroom and instructional area was ready for students’ return Wednesday. Laborers painted, installed furniture and prepped the courtyards to become outdoor learning spaces as teachers hung posters and arranged desks.

Principal Anna Miller said she was “involved from the ground up” during the design process for the school on Broad River Road.

“It’s been a beautiful whirlwind,” she said.

Chapin Middle serves seventh-graders and eighth-graders, while the former Chapin Middle campus, renamed Chapin Intermediate School, serves fifth and sixth grades. The finishes are natural colors, and the large exterior and classroom windows give the school a light and bright feel.

“It says come in and joins us … It invites everyone,” eighth-grade math teacher David Fisher said.

The updated versions of traditional desks allow students and teachers to move around easily for collaboration or to change up the classroom layout. Students, teachers and parents were able to vote on the style of desk at the end of last school year.

Chapin Middle is Lexington-Richland Five’s first 2-story middle school, but seventh and eighth graders aren’t kept separate. Miller said the school is arranged by subject instead of grade to get students used to transitioning between classes as they will in high school. Having two English or math teachers next door also provides opportunity for impromptu planning.

“Those three to four minutes in between classes add up … Instruction is at the forefront,” Miller said.

Fisher said teachers’ collaboration will be easier with two grades at the school instead of the typical three. Miller agreed there’s a big difference between sixth and seventh grade, and staff can better focus on preparing Chapin Middle’s seventh and eighth graders for the next big leap.

The two-grade design gives Lexington-Richland Five an intermediate school on both sides of the district. CrossRoads Intermediate School serves sixth-graders in the St. Andrews area.

Chapin Middle did not hold a traditional open house for parents and students because of construction, which was delayed because of spring rains. But Miller has brought the “Eagle Launch” orientation model to her new school. Students only need to know their first block teacher when they arrive Wednesday.

“The teacher will take care of that class for the rest of the day,” Miller said.

A few families were able to tour parts of the building during late registration.

“The traffic flow should be a lot better in the hallways,” she said.

The school was built to relieve overcrowding at the former Chapin Middle, which housed 1,185 students last year. Miller said enrollment at Chapin Middle is already above what was projected, and more than 800 students will learn there this year.

Chapin Middle is the last school built with funds from the 2008 bond referendum. District spokesperson Katrina Goggins said it’s too early to say if board members are considering another but noted “there’s tremendous growth in (the Chapin) area.”